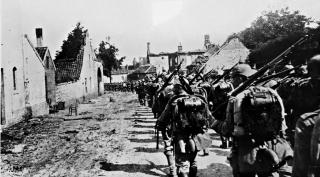 Germany enters the war as allies of Austria-Hungary. Their war plan, the Schlieffen Plan, involves invading and defeating France as quickly as possible, before her ally Russia is ready to go to war.

Following the German invasion, over 1 million Belgian refugees flee their homes in fear. Around 100,000 move to Britain, including Wales, to look for help and seek refuge.

Find out more about the German invasion