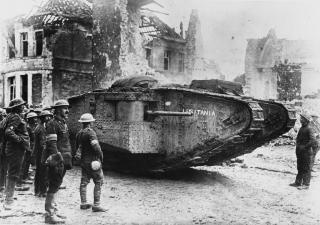 Introduction of the tank

In September 1916, during the Somme Offensive, Britain uses tanks for the first time. Tanks were developed especially for fighting in the First World War. The intention was to develop a machine that could travel over No-Man’s Land, attack enemy guns and act as a shield to keep soldiers more safe from bullets and barbed wire.

Read more about this new technology